"Luanne Hunt creates musical masterpieces that offer universal messages about the challenges all of us face in life through the veil of country, folk and Americana music. Her voice and heartfelt expression of song is filled with a heavenly charm that continues to impress us and undoubtedly will impress generations ahead."

For the Love of Country Official Trailer

I’m not shy about admitting I turned 60 in August and actually couldn’t be happier to have reached this milestone in my life.  As I look back on my trials and triumphs, I realize every step on my journey has led me to the exact right place to accomplish a few of my unrealized dreams.

One of those has been to find a way to use my talents to give back to those in need.  Thanks to Marie Bogdonoff, founder of Villagers for Veterans, the door opened to stage the production you are about to see, “For the Love of Country.”

In creating this fundraiser for our beloved veterans, it was my intention to deliver an enriching and unique entertainment experience that would remind our audience that despite everything our country has gone through lately, we are still as strong and resilient as ever.  And nothing can erase our rich, cultural history that truly has grounded and united us through every challenge we have faced.

Beyond sharing these sentiments through my creative work, I also was thrilled to have the opportunity to honor the incredibly brave and dedicated men and women of our military.  My father Louis served in the Army and my cousin Brad spent 20 years in the Navy. Several of my uncles also served, I am eternally grateful to be a part of something that will benefit so many of our American heroes.

Thank you from the bottom of my heart for supporting this work.  It means the world to me.

About the Writer & Producer

Surviving and remaining relevant through the ever-evolving and fickle music business is no easy feat, even for artists who have reached the highest levels of fame.  Yet in spite of the odds, independent country, folk and Americana star Luanne Hunt has continued on an uphill climb since she first arrived on the scene in the mid-1990s.

Her extensive body of work, and vast amount of accolades, speaks to her determination to stay in the game and continually produce magical and relatable music that strikes a chord with her fans, djs, critics and most everyone who discovers her songs for the very first time.

While Luanne has done her fair share of live performances through the years, the hours she has spent in the studio perfecting her craft far outweigh her time on the road.  But now, the singer/songwriter is ready to put herself in front of the public again to accomplish her philanthropic goals and raise money for veteran’s organizations and other worthy causes.

Her exciting new show, "For the Love of Country," features Luanne performing many of her hits that have reached No. 1 on prominent charts around the world, including New Music Weekly, Airplay Express, European Country Music Association and Roots Music Report.

These songs also have garnered rave reviews from music critics who write for prominent publications, such as Billboard, American Songwriter, Paste, Universal Music and Spin, to name a few.

Other highlights of the show include a spellbinding, sign language performance to Luanne's tribute to women veterans, "Brave American Girl." It also includes dancers, a musical tribute to 9-11 and an Elvis impersonator reenacting The King's, "American Trilogy."

Beyond writing and producing dozens of live productions over her nearly three-decade career, Luanne has released 21 studio albums. She has scored 17 No. 1 chart hits and is the recipient of six American Songwriting Awards, three CD of the Year awards from the National Traditional Country Music Association (NTCMA) and two World Songwriting Awards.  She is a two-time Josie Music Awards nominee and was inducted into the Independent Superstars Hall of Fame in 2016. 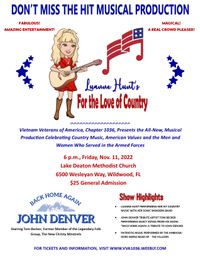 Luanne Hunt's For the Love of Country